A couple days before Leonard Nimoy revealed he is suffering from COPD, I felt inspired to appeal to my inner Trekkie as a Tarot reader. It’s hard to fathom that the year I began to investigate Tarot, 1997, is also 31 years after Mr. Spock came to tv.

I send my best wishes to Mr. Nimoy, his family, friends and fellow followers. In his honor, here’s an interpretation of his life at present, via Tarot. 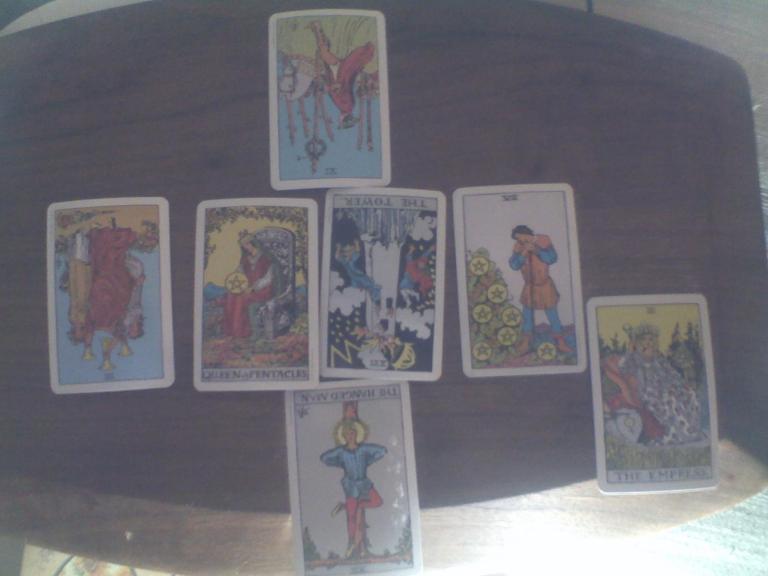 The Queen of Wands. Contemplation of life’s labor. Recognition of how life has been nurtured: what has grounded and helped maintain well-being.

The Tower Inverted. Private life is now public. Mr. Nimoy’s emotions about his health are not only his focus, but now called to the attention of his fandom. Some turmoil and upset, but not perhaps as pronounced as it might be if this card were turned right side up.

Card 3: How the client wishes his/her life to seem:

Six of Wands Inverted. Because I recall reading that he tweeted he can’t get around as fast as he wishes, and I’m taking much liberty in doing this reading, I’m interpreting this to mean Mr. Nimoy would like to focus on what he can accomplish next, how he can move forward and continue to foster respect. Part of this work seems to be done as he sends out tweets warning against the dangers of smoking.

Card 4: The client’s life as others see it:

The Hanged Man Inverted. Apparently the public is getting the message, and listening to the man who will forever be remembered as saying, “Live long and prosper.” The inversion here could indicate that Mr. Nimoy’s ability to communicate a new life perspective due to his condition is received clearly and easily. No riddles intended, no riddles received.

The Three of Cups Inverted. Mr. Nimoy’s focus is seemingly on his emotions, and especially the bonds he has formed in this life. Cheers to that, Mr. Nimoy! Joy certainly leads to its own immortality, in that happiness carries on the hearts of those who share in it.

Seven of Pentacles. Three of these seven cards are not inverted. And these three all have an earth/fertility theme. Here prosperity appears to be something that may be in such abundance that it could be daunting to know where to begin harvesting. Prosperity can come from recognizing the space between growth and harvest. Periodic rest is at least as valuable as ambition.

The Empress. Respect for nature and a rebirth, a new start, more projects ahead. Honor. A welcoming environment that also shows natural leadership. The helm is steered well with sunny skies and a ready harvest.

Want your own reading? Contact me. Consider liking my page. I have email readings starting at $20.

Thanks for the read.

2 thoughts on “Going where no reading has gone before”

Get Social with Tarot and Tea Leaf Readings